"Your optic blasts are nothing more than harmless colored light. The truth is, Cyclops, I'll be hitting you and your trashily dressed girlfriend very, very hard now." -Occam

Occam, a.k.a. Edmund Ockham. Sociopath and mutant threat. Power of "Epistemic Belief". If Occam believes it then it's true, or at least the truth for him. The simpler an explanation he can imagine, the more powerful he becomes. The closest analogy to how his powers work would be a combination of Proteus and the Purple Man, but instead of effecting the world around him, Occam's abilities are internal, effecting himself.

"Dr. McCoy, I don't believe that there's anything you or your people, and I use that term loosely, can do to stop me." Occam's goals are purely self serving. He has no interest is either Xavier's dream or Magneto's view of mutantkind's place in society. Occam has self-confidence to rival Doom but none of Doom's drive or lust for power. Whatever he wants, he's going to take and neither human or mutant life means anything to him. Eventually, the growing property damage and rising body count will draw him into conflict with the X-men. It's important though that under no circumstances what so ever will Occam ever be depicted killing anyone with any sort of razor. No. Just, No.

Occam has used his abilities to reshape his body into what he believes is the ideal human form, and in the Marvel Universe this means Captain America. A dead ringer for Steve Rodgers, and dressed in hand tailored suits and designer sunglasses, Occam kills with philosophy.


This is my first pass at creating a villain specifically for the X-men. It's odd. Now that I think about it, after all the years of being a fan of the X-men and writing unreleated stories of my own, I've never scribbled anything specifically for this franchise. Going back and reading my initial take on this character I think I might hate the idea. We'll see how I feel in the morning. This post might be heavily rewritten in the next 24 hours. Click the comments link below to tell me how much this concept both sucks and blows.
Posted by Michael Strauss at 10:17 PM No comments:

A double shot of classic covers while I got Marvel's Merry Mutants on my mind.* 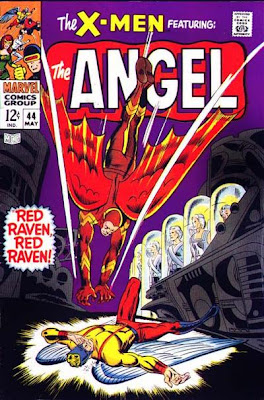 Issue forty-four, the first X-men comic I ever read. 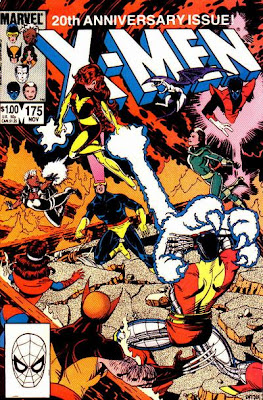 And issue one seventy-five, the first issue I bought for myself using my allowance.

#44 is no longer in continuity as I barely remember Roy Thomas' story from this one. However, the sheer awesome beauty that is Claremont and Smith's work on #175 is firmly in continuity.

*Alliteration, I know. Sorry.
Posted by Michael Strauss at 8:03 PM No comments:

In the total and complete never-in-a-million-years possibility that I got to do what I wanted with the X-men franchise, here's where I'd start:

Big Things Happen. If Apocalypse were to eat the M'krann Crystal or an army of Deviants show up and turn Chicago into an all-you-can-eat barbeque, it happens here.

Hatred. Bigotry. Fear. But the X-Men are working to change the world. They're the public face of mutants' rights, reacting to disasters and policing the mutant population like a two-fisted version of the Red Cross.

I see the Blackbird flying overhead of a disaster area. Storm and Angel rescuing survivors and contain the damage while Rogue and Warpath are on the ground punching out looters. Meanwhile, Nightcrawler is passing out Hostess Fruit Pies to kids wrapped in emergency blankets.

When the X-men aren't working as mutant-kind's ambassadors they're fighting their own crazy soap-opera lives. I'd explore the idea that a mutant isn't just a human with superpowers. A mutant's life is different from a regular person's; the way they think, act, deal with relationships and perceive the world should be mutated as well. Otherwise, in a world that gives the FF and Avengers parades, why the anti-mutant bias?

100% on these facts: Ororo Munroe is sporting the mohawk and leather vest. She is not sporting a wedding ring. Rogue is wearing the new retro costume. Angel does not have blue skin. Iceman is a man covered in ice, not a man made of ice. Rachel Summers is wearing her mother's classic green costume and sometimes forgets to use her telepathy to hide her hound tattoos. And Darwin is awesome.

New Mutants
Professor X with Cannonball, Dani Moonstar, Husk, Hellion and Dust. The students have become the teachers. Fill out the rest of the roster with a rotating focus on the kids from "New X-men" mixed with Morrison/Whedon's kids and former New Mutants. The school. The Danger Room. Teen angst with two scoops of fun. Opening story arc: "Welcome to Xavier's, Hope You Survive the Experience!"

Banshee, Agent of SHIELD
One of the original pitch ideas for the All-New All-Different X-men was to have an international cast traveling the globe in a flying base, reacting to threats to mutant kind (Roy Thomas' idea). This would be the 21th century update of that unused concept.

Sean Cassidy, ex-Interpol and current SHIELD agent, gets top billing but it's definitely a team book. Globe spanning espionage action and mayhem. Banshee's team is an integrated mix of SHIELD personnel and former X-men, given a helicarrier and tasked as first responders to superhuman threats.

Team Leaders: Banshee and Mockingbird. (Isn't she dead? To riff on a line from Claremont: She was. She got better.)
Field Team: Bishop, Deadpool, Skids, Sabra, Gambit and maybe characters like Pete Wisdom, Puck and Sunfire. Plus a group of SHIELD agents (mix of mutants and humans) who have no ties to Xavier's school. Field team rosters can be custom tailored to the mission, drawing from the pool of agents living on the helicarrier.
Helicarrier Support Team: Forge, Cecilia Reyes, Sharon Friedlander, Tom Corsi and Roger Bochs.
Plus we'll have the SHIELD presence: agents, techs, medics, the post CIVIL WAR version of "cape killer" soldiers and interaction with people like Agent Brand, Maria Hill, Val Cooper, Gyrich, Fury, etc.

Cross-pollenization book, so your villains are Mystique's Brotherhood teaming up with Arnim Zola and the All-New All-Different Masters of Evil.

New Excalibur or Exiles
If Claremont deserves a "thanks for everything" book then he gets one of these and the other one get's the axe. If not, they I'd pull them both from the monthly slate.

But, wait. Where the hell's Wolverine? Glad you asked. With a solo book (guess which of the current two I'd axe) and a day job with the New Avengers, there's not enough time in the day. Let the rest of the X-men shine without the old Canucklehead for a while.
Posted by Michael Strauss at 7:47 PM 1 comment: 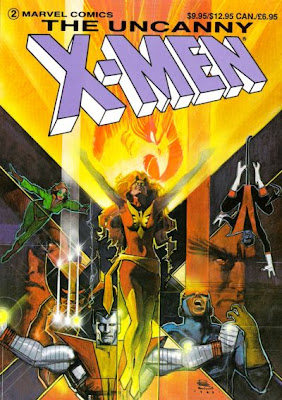 When I think of the X-Men this is the image that first comes to mind. The best line-up. The best creative team at their at-each-other's-throats creative peak. This is the defining story along with, for my money, "God Loves, Man Kills" close on it's heels. Twenty-five years later, and it's still a key foundation of the X-men mythos.

When I first read this story it was in this graphic novel format with this cover, and hot on it's heels came Uncanny X-men #175 a more than fitting follow-up tale.

Oh, and if you haven't done it yet, do yourself a favor and listen to the Comic Pants X-men podcast.
Posted by Michael Strauss at 11:31 PM No comments:

So there's 3 year-old me, wearing footie pyjamas in the back of my dad's station wagon and gaping wide eyed as Han Solo runs away from those stormtroopers on the Death Star. Over the years I've lost count of how many times Han's chased those troopers down that hallway only to come running back the other direction. But today he's doing it again on HBO and the digital cable program description made me stop and watch.

"Robots and other allies help a youth and a space jockey rescue a rebel princess and battle dark forces bent on intergalactic rule."

You're damn right they do.

Unfortunately, after all the years of related toys, comics, books and prequels there's no way I can just watch Star Wars and enjoy it for what it is. This isn't a dig at the prequels, which had their moments, or the all the good, bad and terrible (I'm looking at you, K.W. Jeter) Expanded Universe novels. I'm just lamenting that my selective continuity midiclorians aren't strong enough where I can just enjoy a braless Princess Leia in the garbage smasher with a bowl of popcorn without being reminded of Jacen, Jaina and whatever the name of that floating nursemaid-bot at the end of "Sith" was called.

I don't need to know the name of the guy who taught Han to hot wire a speeder bike. No one does. All we need to know is that he's an arrogant pilot who's loyal to his friends, loves his hunk of junk spaceship and is willing to gun down Greedo in cold blood.

Star Wars is a prime example of the too-much-of-a-good-thing corollary. The movie works best on its own or supplemented with just the two sequels and maybe just a couple of the books and comics, no more. The stories that matter lose their importance and get bogged down by minutiae if you, at some point, don't stop lumping backstory on them.

It's impossible to unsee Yoda with a lightsabre or armies of cartoon Gungans.

Unrelated to the point: "Hokey religions and ancient weapons are no excuse for a good blaster at your side, kid." Thanks, Han. I'll try to keep that in mind.
Posted by Michael Strauss at 2:49 PM No comments:

In No Particular Order

And if you were left off the list, rest assured this is by no means a final or complete rundown. Your time will come.
Posted by Michael Strauss at 1:52 AM No comments: 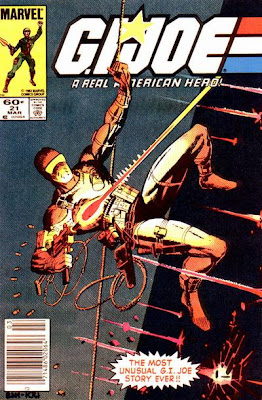 January 23rd? Is ten days without a new post long enough to declare a fledgling blog deceased? Man, I hope not. I do have the built-in excuse though of an honest-to-Kirby paying writing gig to explain the lack of postitude. But deadline met, project turned in and check in hand, I'm ready to get caught up on slacking off.

Joss Whedon's Wonder Woman dies stillborn. And yet Nick Coppola's Ghost Rider is still barrelling toward its release date unchecked. I really am starting to fear that the miracle run of comic book film adaptations to going to derail itself.

Is Sci-Fi Channel's "The Dresden Files" a majorly reworked pitch idea for a Dr. Strange TV show? No? Because, damn, it sure feels like it wants to be.

I'm the last one to the party, but I sat down this morning and read the first trade of "Y: The Last Man". Hell yeah is all I've got for now. BKV is a badass.

Oh, and my dream casting of the absolute dream writing job I could ever hope to land: Henry Simmons, Chad Michael Murray, Gina Torres, Carly Pope and Dennis Dunn.

Which reminds me, now that the paying writing is out of the way its time to get back to the spec scripts. And the drinking.

Go Sabres.
Posted by Michael Strauss at 11:43 PM No comments: