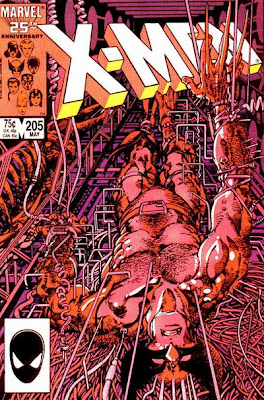 Chris Claremont and Barry Windsor-Smith in 1986, using Wolverine to remind us all that Katie Power is the baddest 6 year-old on the planet.
Posted by Michael Strauss at 9:24 AM No comments:

Bendis says: “It’s someone with a long history in the Marvel Universe. There are quite a few people it could be, and it’s not necessarily the person you immediately go to, but it’s someone I have an affection for who also has a history of donning a guise that best suits his or her mental tone. And this is his or her mental tone right now. And it just so happens there is a costume that needs filling and a person who can fill it, and so it’s taken."

Yeah. I'm thinking that it's gotta be Hank.

Of course Pym. Who did you think we were talking about?

That someone's hiding in.

That Hank Pym (you know Yellowjacket, Giant-Man) is hiding in.

And you're reading all this from the "history of donning a guise that best suits his or her mental tone" remark? Isn't that...

A reach? I guess we'll find out.

Sure.
Posted by Michael Strauss at 7:21 PM 2 comments:

Why Aren't They The New Defenders?

Wow. Except for the last two characters, who didn't exist, and the absences of Moon Knight and Gargoyle, this is the exact super team who's adventures I wanted to read in 1986.

Actually, after the initial story arc, it'll probably come time to fill out the roster with some new members. I'd add my boys Marc and Issac along with Valkyrie, Hawkeye and Mockingbird.

Mockingbird's dead, you say? Yeah, so's Jean Grey and Bucky Barnes. Oh, and Future Michael from 2008 just hopped off the Cosmic Treadmill, made a snide comment about Uncle Ben and Mary Jane being still "deseased" as well, and then disappeared. I hope that doesn't mean what I think it does.

Captian America may have said, "You're The Avengers, dammit!" but calling this team "The Defenders" isn't a reach either.

While we're discussing this, here's my beef with Ronin. He (or she) is just a cypher. The character is nothing more that a cool looking ninja costume. For the costume's previous appearances, it was Echo wearing the duds. Now she's got separate billing, so we have someone new dressing as a ninja. Since the A-team is ostensibly mint jelly* already, what further good does it do for the person wearing the Ronin mask to hide their identity? Rampant wide, wide world of web speculation has it that it's really Captain America wearing the ninja drag. It wasn't that long ago, two or three story arcs tops, that "Who is Ronin?" was the big mystery and now we're retreading that same plot device. Sigh. Hopefully, it's not just Cap in double secret hiding.

This time the person wearing the mask ought to be the "real" Ronin, someone with an origin story, secret identity, discinct set of powers, and personality. Otherwise the guise will rapidly devolve into parody. "Who is Ronin this time?" My guess is Speedball, or maybe Hank Pym.

Or maybe Ronin's real identity goes by the initials Brian Michael Bendis. No, I don't think that needs a Spoiler Alert! tag.


* Because they're on the lam. All credit to Abe Simpson.
Posted by Michael Strauss at 4:21 PM No comments:

So Where the Hell's Abin Sur Already?

Your results: You are Green Lantern

Hot-headed. You have strong will power and a good imagination.

Click here to take the "Which Superhero am I?" quiz...

Posted by Michael Strauss at 2:44 PM No comments: 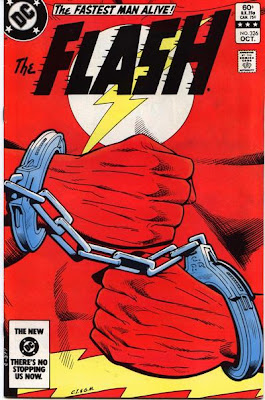 Flash #326, October 1983. So, it's a month shy of my tenth birthday and I'm in the local book store checking out the comics rack.

Actually, I'm gonna stop right there and let that sink it for a second. Comics in a book store. In a mall. No, that's not the ghost of Rod Sterling standing behind you with his hand on your shoulder.

Anyway, so there's ten year-old me in the book store checking out the rack and debating which comics deserved my allowance when there it was, Flash #326. This cover stopped me dead in my tracks. "How can the Flash be under arrest? He's a good guy!"

Now, I was a Marvel kid. Introduced to the X-men early on, and from there to Spidey, the Thing, Hawkeye, Moon Knight, and Power Man and Iron Fist. But this was the Flash, from Superfriends! All I knew of those "other comics" was what that I knew from "Superfriends", the Adam West "Batman", and the "Plastic Man" Saturday morning cartoon.

And I knew that Falsh was a good guy. How could he be under arrest? I had to know. Needless to say, there was no way I was leaving without that issue. Just a great classic cover and to this day every time I spent money on a DC comic I blame it on this cover.

Sixty cents well spent.
Posted by Michael Strauss at 11:25 AM No comments:

"You know what old Jack Burton says at a time like this?"

Not yet, but my mind is reeling at the possibilities.
Posted by Michael Strauss at 12:37 PM No comments:

Nothing else to see here. Move along.
Posted by Michael Strauss at 2:23 AM No comments:

It's sitting right there on page 14, panel 2, and I can't believe I didn't pick up on it in the character's previous appearances. Damn you, foreshadowing! You're a cruel mistress. Marvel Editorial and Mark Millar have given us a status quo restoring "out" should they need it. If I had a scanner I'd post a scan of the image to go along with it.*

MIRIAM: "I REALLY WANT TO THANK YOU FOR ALL THIS. NOT JUST THE MONEY. I MEAN, ALL THE WORK YOU'VE DONE TO PUSH MY BIG IDEA."

Wow. It's too bad I'll have to wait for the deluxe trade edition to see any of Millar's script for the issue. I'd be really surprised if the panel description for page 14, panel 3, is anything other than:

PANEL 3. CLOSE ON TONY AND REED. THEY GAZE LOVINGLY AT MIRIAM WITH THE BEATIFIC SMILES OF THE MIND CONTROLLED.

Granted, I have no idea how the story is really going to play out. That said, here you have a built-in escape clause for a sales backlash against CIVIL WAR, all of the ancillary tie-ins and the post-CIVIL WAR Marvel universe. If the books weren't doing gang busters the easiest thing in the world to do would be to reveal Tony and Reed as being mind controlled. Why else would they be acting so wildly out of character? Other characters, like Hank Pym and Spidey haven't had the direct telepathic whammy put on them so their opinions can vacillate, convictions waver.

Here's how I see it going down at some point in the future, forgoing precise page numbers:

NEXT PAGE, NEXT PANEL. TONY AND REED IN STREET CLOTHES ARE MEETING WITH MIRIAM AGAIN TO UPDATE HER ON THE DEVELOPMENT OF THE 50 STATE INITIATIVE AND GET THEIR LATEST MARCHING ORDERS.

NEXT PAGE, SINGLE PANEL SPLASH. IN A FLASH OF ELDRITCH LIGHT APPEARS DR. STRANGE, TELEPORTING HIMSELF ONTO THE SCENE. DR. STRANGE FLOATS ABOVE THE TRIO, HOLDING FORGE’S NEUTRALIZER PROTOTYPE.

PANEL 2. MIRIAM CRUMPLES TO THE GROUND. SFX OF HER POWER BEING STRIPPED FROM HER VISUALLY CALLS BACK TO UNCANNY #181 AND ORORO.

PANEL 3. TONY AND REED, THE SCALES FALL FROM THEIR EYES.

REED RICHARDS: "MY GOD, TONY. WHAT HAVE WE DONE?"

EPILOGUE: A PSYCHIATRIST’S OFFICE. ANGLE ON THE GRIEVING MOTHER. MIRIAM SITS ON THE COUCH AND WEEPS, HER FACE IN HER HANDS. SHE’S BEING COUNSELED BY ONE DOC SAMPSON.

Granted, there’s some gaps and leaps missing to get to this point. However, I think you can see what I’m trying to get at. This would be a satisfying ending to the story, and an emotional one. It would also tie up nicely everything that’s happened so far and give additional weight to the characters as they work to atone for their actions. Not only are Tony and Reed guilt ridden over what they’ve done, but they’re essentially innocent in the eyes of readers, freeing us to remain fans of the characters. Additionally, the secondary characters caught up in CIVIL WAR have learned the lesson of what blind patriotism brings. It’s a lesson both sides can use to help guide their actions going forward.

This leaves multiple story arcs just waiting to be developed. Tony and Reed’s atonement, rounding up all the freed super-villains, cleaning up after the “50 stater” super teams, etc.

And Captain America, the embodiment of true American values, was right all along.


*But then again, the 3 people that know about this blog can either read their own copy or borrow mine.
Posted by Michael Strauss at 6:29 PM No comments:

Cheaper Than A Doctor Bill 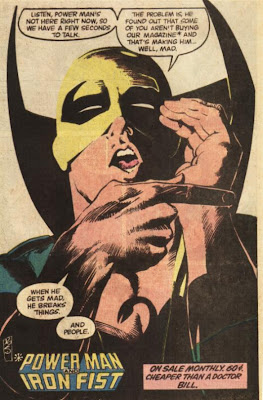 Not only is this the best house ad in all of comics, but it's almost single handedly responsible for my continuing man-crush on Luke Cage and Danny Rand.
Posted by Michael Strauss at 1:18 AM No comments:

In continuity: Danny the Street

Out of continuity: Superboy-Prime and the universe's punchable walls.

Internet Manifesto: Or Everyone Else Is Already Doing It.

So, here’s the theory I’m running with when it comes to New Year’s resolutions in aught seven. Max Afinogenov’s shooting percentage is 19.8 as of January 1st. Chris Drury’s is 18.9. I’m not gonna take as many shots as they have so far but two out of ten? I think I can stick with two out of ten resolutions, or better yet 4-for-20.

This dumping ground for all the pablum that leaks out of my brain is one of the twenty. It’s also a distraction from the real writing I’ve been dragging ass on. So when procrastination is beating on the script that should I should be well into a second draft on, now I have another distraction to blame.

“Selective continuity?” you ask. Yeah, because do you remember when Reed and Sue Richards were in the Avengers with the likes of Gilgamesh, Doctor Druid, and Sersi? Me neither. Never happened. Scott Lobdell’s Uncanny X-Men? Who?

I do remember Ostrander’s Suicide Squad though, and the JLI. How about the time that Kurt and Logan stood back and finished their beers while the Juggernaut brought the whole bar down on Colossus’ head? Here at Selective Continuity that happened just a couple of months before Morrison’s run.

So I’m gonna blather about comics, ignore things I don’t like, try to restrain my gushing praise for the Sabres, and vent the random bits that don’t belong on the script page or in my head. Along the way I hope to hammer the spec scripts I’m working on into a submissible form.

As for the rest of the twenty, maybe the list stays where it belongs, in my head. Maybe it ends up here, where it doesn’t really belong.
Posted by Michael Strauss at 5:49 PM No comments: