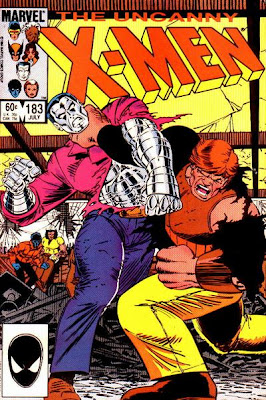 Chris Claremont has taken a lot of flack in recent years for certain quirks of his writing style but his run on X-men is largely responsible for so many things that I think are awesome. Not to mention responsible for the still growing number of long boxes in my closet. This issue, in particular, is the one that I'll hold up as defense exhibit A when people knock Claremont.

Its a beautifully crafted issue that addresses the fall-out from previous stories, advances sub-plots and tells a done-in-one tale, mixing character bits with a knock down, drag out between Colossus and the Juggernaut. The comics trifecta. Everything in it works. From Kitty's pain, to Kurt and Logan's attitude towards Peter, to the handling of Cain Marko and Selene (1st appearance), this is Claremont in his prime. Uncanny from around 158 through 228 is the high point, for me, of Claremont's X-men. And this issue is just note perfect. Its a level of storytelling I'd love to reach some day.

Oh, and even though it has nothing to do with this issue, in the crazy alternate universe where I get to write a run of X-men comics I'll be dropping a reference to Rogue's poppy allergy. And a shiny Selective Continuity No-Prize to the reader that picks out the reference.
Posted by Michael Strauss at 11:45 PM