Sigh. I suppose the arguement could be made that a Spider-Man who's single and has trouble with girls, maybe one who's still in high school, is more relatable for a younger audience. I'd agree with that. Spidey's always been the guy who's a great hero but crap at managing his personal life. Pretty much from the start it's defined who he is. He's the wise-cracking (and smart) smart-ass who stops the Sandman and Electro from robbing banks, but during the day has to dodge bullies and Aunt May's wheatcakes.

Marvel still publishes Ultimate Spider-Man and Marvel Adventures Spider-Man, don't they? And they're widely available in places like Target where kids can get to them?

These things are also a major part of the Spider-Man mythos. Hell, if you're reading this then you've read the banner at the top of the page. Spider-Man's guilt may motivate him, but it doesn't consume him. If it did then Peter Parker couldn't ever be the wise cracking Spidey we fell in love with during The Electric Company or Spider-Man and His Amazing Friends, or while he was tooling around in Gerry Conway's spider-mobile. He'd be Batman. 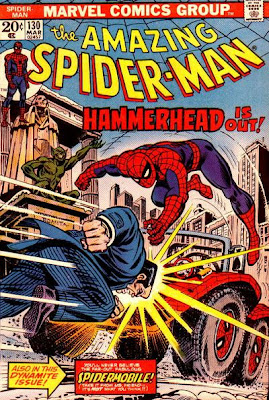 I'm not convinced that the storytelling options with a widowed or divorced Spider-Man are greater than a happily married Spidey. Could any of the other MacGuffins that Marvel Editorial might employ, like mind-wiping Mary Jane or imprisoning her in the Negative Zone or having her whisked away to Red Raven's hidden island to raise their baby, be more palatable? Somehow I doubt it.

"The hot redhead from the movies. You know. Weren't they married for 20 years?"

"Nope. I have no idea who you're talking about. This is a swinging, single Peter." 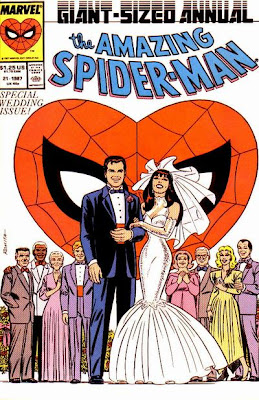 Morbid, violent "616" Spider-Man, who dresses up in the clothes of the guy who tortured his wife, or ex-wife, with his toxic stingers and magic healing blood, he bears little resemblance to the fun loving and fun super-hero I remember as a child.

But, you're about to say, comics weren't as innocent as your faulty memory thinks they were. I'll agree. They dealt with mature subject matter, like death and suicide and Emma Frost's corsets.* "Kraven's Last Hunt" played out over six issues across three titles, published over just a couple of months. It didn't take 5 years to play out and, while it was a grim story, the villain acted like a villain and the hero was heroic, coping with the challenges thrown at him.

Uh oh, I'm starting to rant here. Time to steer back towards the point. I'm highly suspect of the direction Spider-Man's being taken.

Granted, I dropped Amazing not long after the "Sins Past" story, but if I only had "One More Day" at this point I'm pretty sure I wouldn't spend it reading Spider-Man comics.

Spider-Man's wearing a serial killer's "skin" and his marriage is weeks from falling apart.

Unrelated, but I'm also hesitant to spend $2.99 on a DC comic that might not even be in continuity in six months.

If I love comics, then why does my pull list keep getting shorter?**

Oh, shit. The final panel of "One More Day" is a green skinned MJ holding her jacket in Peter's front door, proclaiming "Face it, Tiger. I'm a Skrull." isn't it?


*The White Queen's and Black Queen's fashion choices did nothing to influence my taste in women. Nope. Nothing at all.

**but I'm also enjoying the hell out of titles like Astonishing X-Men, Immortal Iron Fist, Daredevil and Agents of Atlas.
Posted by Michael Strauss at 4:35 PM

That is indeed the only way it can end. She became a Skrull the day she got that MacFarlane Big Hair(TM). Easy to track, really.

My initial reaction when I heard about the Skrull thing was excitement. Big conspiracy? Alien Invasion? Death from above? I'm in.

Right away, I pictured a Manhattan crowd scene pencilled by JR JR with half the civilians in the crowd morphing into Skrulls. Awesome.

Then I remembered that I already read Mellinium and it wasn't that good.

Oh, and I also already read the stories where they retconned Johnny Storm's dick move of sleeping with Alicia when Ben's back was turned by making her a Skrull. And that wasn't that good either.

And thinking about both of those stories just made me tired.

Maybe the big reveal will be that Llyja and Johnny's egg-baby grew up to be the Luke Cage in New Avengers.