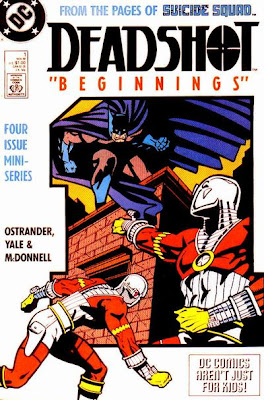 My introduction to the character actually took place in the pages of Suicide Squad #1, which I picked up because of the "Legends" crossover blurb on the cover.

This series though, by Ostrander, Yale and McDonnell, took Floyd Lawton's character which they'd been building in the main title and cemented it. The four issue mini-series was a perfect exploration of the character's history and motivations.

For me, and the way the selective continuity in my brain works, the original 1988 Deadshot mini-series is on par with, and DC's answer to, Marvel's original Wolverine mini from Claremont and Miller.

As far as I know, the series has never been collected but if you can find the issues is the dollar bins grab them. You won't be sorry.

Oh, and remember "DC Comics aren't just for kids", in case you needed that reminder while reading a story about a suicidal contract killer with mother issues who dresses up in orange and silver tights.
Posted by Michael Strauss at 3:32 PM

Too true. Deadshot was the coolest Suicide Squader, and this series by the very same people who made SS a classic is basically missing issues from the series.

i wasn't crazy about the art but story wise this was a great read and Deadshot at his best. interesting you mentioned DC comics and kids in the posting given what happened to Floyd's son. i think they should deal with all sexual predators in that same kind of "Deadshot" manner.
http://suicidesquadtaskforcex.blogspot.com/

Following the outcomes, the spin button was disabled for 3 s . This was accomplished so as to to} effectively measure coronary heart rate deceleration. Games that provide the player something to collect or progress in the direction of|in path of}. Goal-oriented games that provide a purpose to play and a purpose to stay. Just walking around 빅카지노 the casino, you will notice loads of older type games with bonus rounds, like Texas Tea, Lobstermania, Money Storm, Where's The Gold and Alien Slots - . Not to mention Texas Tina, Jackpot Party, Tabasco Slots, Frog Prince, Unicorn Slots and Cluedo Slots.