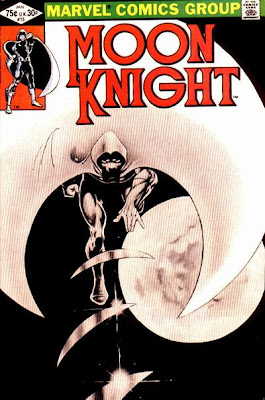 As a kid I bought my comics where I could. The book store, a cigar store, the local equivalent of the Kwik-E-Mart, they all enabled my early buying habits. Heck, I even bought the Spider-Man/Wolverine one-shot at the supermarket, along with the Buckaroo Banzai movie tie-in and the first issue of Iceman's original mini-series.

But this isn't about being able to find comics everywhere. This is about the first time I found a comic in a local comic book store. It's also the first back issue of a comic that I bought.

The next time that someone's complaining about the "death" of the comics industry, or specifically the reality that comics no longer exist outside of your LCS, point them to "Moon Knight". The first (correct me if I'm wrong) direct market title, Moon Knight showed that comics could tell more "adult" themed stories and be sucessful without newsstand exposure.

Me, I just loved (and love) that art.
Posted by Michael Strauss at 6:36 PM

I thought DAZZLER was first. At least that's what a book of marvel history said.

you got a nice blog here Michael. if your interested i could email you a Marvel Almanac cover from Brazil that includes some of this same Moonknight cover art.
daywalkr@aol.com