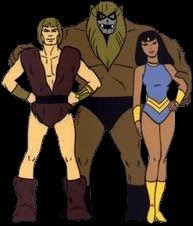 The show was Conan, Chewbacca and hot chick in a bathing suit fighting Kirby monsters and giant robot monkeys atop the ruins of Mount Rushmore. With the minds of Steve Gerber, Alex Toth, Jack Kirby and Roy Thomas involved in the creation and development of the original Saturday morning cartoon, it's presumptuous to assume that I could reimagine it into something better.

"Thundarr" is a property that doesn't need fixing, just exposure. To that end, the "TtB: Strange New World" series will serve to built on what's come before. Characters' personalities and motivations will be explored and given depth that 23 minutes on Saturdays doesn't allow.

The opening arc (6 issues) will provide a definitive origin story for our three heroes and how they got where they are when the show started. Future stoylines will tie together moments and characters from the cartoon, showing the reader the larger world Thundarr and his friends inhabit.

Thundarr was raised among the plains people of North America where he became an accomplished horseback rider. A confident and capable warrior, Thundarr is a man wihtout a home or a people. The series opens with him, friendless, as a slave and gladiator. Thundarr's boastful and a bit arrogant but has the skill to back it up. Unfortunately, he's also a bit of a knucklehead and is often oblivious to the subtler things. Think equal parts Conan and Jack Burton. His signature weapon is the Sunsword a, well.. it's a lightsabre.

Princess Ariel, magician and walking encyclopedia. The princess grew up in the palace of her stepfather, Sabian, learning the secrets of the ancient pre-cataclysm world and unlocking the mysteries of magic. Ariel hates the brutality she's witnessed. Princess Ariel is, in fact, the real hero of the story. She's on a quest and is committed to making the world a better place. Thundarr and his pal Ookla are just a couple of thrill seekers along for the ride. Ariel's weakness is that she's head over heels for Thundarr, even if he's too thick to see it.

Ookla the Mok. "Argh! Argh, argh!" One of the many new sentient species on Earth to rise from the cataclysm, Moks are lionine bipeds. Tall and strong, Moks are known as loyal and ferocious warriors. An insular people, if kept in captivity too long a Mok will revert to a bestial state, becoming little more than a killing machine. Ookla and Thundarr are inseperable friends, sharing their loves of drink, combat, action and their pasts as captives of Sabian.

Sabian, evil wizard and Ariel's stepfather. The antagonist of the first arc, he uses sorcery to hold sway over a realm of monsters and pits slaves against each other in gladiatorial combat.

Gemini, the most powerful wizard on Earth. His domain streches up and down the Atlantic seaboard. There's nothing he hates more than meddlesome troublemakers wandering about and inspiring hope among the people. He'll stop at nothing to destroy Princess Ariel and her knucklehead companions. Gemini's magics has animated the Statue of Liberty and it now patrols Gemini's tower, a symbol of terror on never ending guard duty.

Simius, ruler of the ape-men of Los Angeles. He has a giant robot monkey he uses to terrorize the local populace.

ISSUE 1, PAGE 1. SPLASH. ALONE ON THE DIRT FLOOR OF A COLISEUM STANDS THUNDARR, FACING THE READER IN A FIGHTING STANCE. HE'S HOLDING A CRUDE AXE IN ONE HAND AND A NET IN THE OTHER. THE COLISEUM STANDS ARE PACKED WITH MISSHAPEN FREAKS, MUTANTS AND ALL MANNER OF KIRBY-ESQUE MONSTERS. BEHIND THUNDARR, IN A PRIVATE BOX SURROUNDED BY HANGERS-ON AND VIZIERS, IS THE WIZARD SABIAN. HE'S STANDING AND POINTING DOWN AT THUNDARR.

CAPTION: "THE YEAR: 1994. FROM OUT OF SPACE COMES A RUNAWAY PLANET, HURTLING BETWEEN THE EARTH AND THE MOON, UNLEASHING COSMIC DESTRUCTION! MAN'S CIVILIZATION IS CAST IN RUIN! TWO THOUSAND YEARS LATER, EARTH IS REBORN...

CAPTION: "A STRANGE NEW WORLD RISES FROM THE OLD: A WORLD OF SAVAGERY, SUPER SCIENCE AND SORCERY!"

SABIAN: DESTROY THE HUMAN!
Posted by Michael Strauss at 4:32 PM