Year One. Dark Knight Returns. Killing Joke. The Long Halloween. Man of Steel. Whatever Happened to the Man of Tomorrow? Superman for All Seasons.

Batman and Superman have gotten the star treatment for years. DC says that Wonder Woman is an icon on equal footing with the rest of their "Trinity" yet every high profile Wonder Woman story is a team-up, a crossover or guest stars Bruce and/or Clark.

Shine the spotlight on Princess Diana. Pitch an OGN that can stand alongside the "classic" Batman and Superman tales. This should be the story people refer to when they explain why they're a fan of WW.

Caveats: no Batman, Superman or JLA guest stars. The villain or villains must be from her Rogues Gallery. 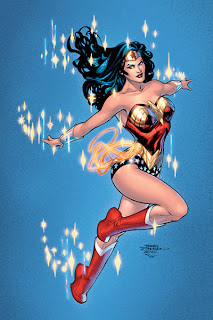 Superman is the last son of Krypton. Faster than a speeding bullet, he leaps tall building in a single bound.

Wonder Woman shows us there’s strength in compassion. Princess Diana is a champion for those without might, an example that there’s a better way.

wonder, n. One that arouses awe, astonishment, surprise or admiration; a marvel.

My Wonder Woman doesn’t carry a sword or snap necks. Her weapons are defensive. Like Captain America with his shield, Princess Diana wields the Lasso of Truth and Gauntlets of Victory in battle. She’s super strong and incredibly fast. Why does she need a sword? You don’t have to put a sword in her hand to make her strong.

She’s beautiful because she’s confidant, strong, intelligent and compassionate. The art in this project should reflect this. Diana’s bearing and posture, her attitude on the page, should convey intelligence and a dry wit. These are the things that make her beautiful and sexy. No cheesecake. She’s above the cheesecake and sexier for it. I don't have a specific name in mind but I'd opt for a painted art style, instead of the normal inked lines. It'd have a more timeless feel, and if there was was a woman willing to paint my Wonder Woman story, all the better.

The costume is iconic and should remain so. Play up the red and gold, regal aspect of the costume. The double W logo. The boots and the tiara. Give her a tunic that partially covers her. Visually the tunic will draw the reader’s attention away from the tits and panties and towards the things that matter; the bracelets, the lasso, and her face, framed by the hair and tiara.

Bondage and the Invisible Jet. Accept everything that’s come before and acknowledge it. But do it without snickering. Like Diana the jet can be a force of nature, represented by sound and wind and light. Diana uses her power, and the lasso, to get villains to submit because there’s a better way than Batman inflicting excess pain or Superman’s ridiculous strength that never hurts anyone. Cops use handcuffs. The lasso is faster and a better visual.

Paradise Island. Wonder Woman sacrifices a life in paradise because she sees tragedy in the real world and cannot abide it. She is a Champion and the price she pays is that she cannot go home until the job is done. Clear cut motivation. Done.

I'd also downplay the focus on the Greek Gods. They're there and we know they're there, but the story's not about them. I think she appeals to a wider audience if they don't have to spend too much time thinking about Greek mythology.

Wonder Woman faces a series of challenges (parallel Heracles 12 tests); ramping up the threat level each time. As the action unfolds she faces down Doctor Psycho, The Cheetah and Felix Faust, among others. It's not until after she bests the first couple of challenges that the reader, with Diana, finds out that they're interconnected.

Diana's Rogues Gallery has learned that another female champion is due to rise up to fight alongside Wonder Woman. Fed up with the years of losing to her already, they're working together to make sure this new champion doesn't survive long enough to take her place in the pantheon of heroes. Even if it means killing all the first born girls in Greece.

PAGE 1, SPLASH. WE'RE IN AN OFFICE BUILDING, A SKYSCRAPER AT NIGHT. THE LARGE OPEN ROOM IS OCCUPIED BY ROWS AND ROWS OF DESKS. FLOOR TO CEILING WINDOWS ARE COVERED WITH HORIZONTAL BLINDS. FAINT MOONLIGHT SEEPS BETWEEN THE BLINDS. A DOZEN GUNMEN, ARMED WITH AUTOMATIC WEAPONS, ARE IN THE ROOM ALONG WITH A YOUNG GIRL, WHO'S TIED UP ON THE FLOOR.

CAPTION: BEAUTIFUL AS APHRODITE, WISE AS ATHENA, STRONG AS HERCULES AND SWIFTER THAN MERCURY. SHE IS WONDER WOMAN.

GUNMAN #1: DOC PSYCHO SAID HE'D BEEN HERE TO MEET US.

GUNMAN #2: IF WE GOTTA WAIT AROUND ANY LONGER I SAY WE JUST ICE THE KID AND COLLECT HALF THE FEE. THIS IS TOO HIGH PROFILE AS IT IS.

PANEL 2. THE OFFICE IS SHAKING. WINDOWS. DESKS. EVERYTHING IS SHAKING LIKE THE BUILDING IS BEING UPROOTED. THE GUNMEN REACT, GRABBING ON TO DESKS. ONE FALLS TO HIS KNEES.

PANEL 4. ANGLE BEHIND THE GUNMEN, THEIR ATTENTION DRAWN TO THE WINDOW. STANDING THERE IS WONDER WOMAN IN HER CLASSIC COSTUME. SHE'S TALL, REGAL AND DETERMINED.

CAPTION: MEN, THEY'RE SO EASILY DISTRACTED. THAT'S ONE REASON I KEEP THE JET AROUND.

PAGE 3, PANEL 1. ONE OF THE GUNMEN HAS SPOTTED HER, IS POINTING.

PANEL 2. THE GUNMEN BRING THEIR WEAPONS TO BEAR, FIRING WILDLY.

PANEL 3. WONDER WOMAN CHARGING ACROSS THE FLOOR. NONE OF THE BULLETS COME NEAR HER.

PANEL 4. PRINCESS DIANA, LAYING THE SMACK DOWN. SHE'S A FORCE OF NATURE. WIDE ANGLE, SO THE READER CAN SEE SHE'S TAKING THEM DOWN TWO AND THREE AT A TIME.

PAGE 4, PANEL 1. ONLY TWO ARE LEFT STANDING, WONDER WOMAN AND GUNMAN #1. THEY'RE ABOUT FIFTEEN FEET APART. THE KIDNAPPED GIRL IS AT THE GUNMAN'S FEET. IT'S A STAND OFF.

PANEL 2. WONDER WOMAN RUNNING TOWARDS THE LAST GUNMAN, DEFLECTING HIS BULLETS WITH HER BRACELETS.

PANEL 3. SHE SLAPS THE WEAPON OUT OF HIS HANDS.

PANEL 4. DESPERATION TIME, HE PUNCHES HER. CONNECTING RIGHT ON THE CHIN.

PANEL 5. ANGLE ON WONDER WOMAN, GRINNING AS SHE RUBS HIS PUNCH OFF HER CHIN WITH THE BACK OF HER HAND.

WONDER WOMAN: DIDN'T ANYONE EVER TEACH YOU NOT TO HIT GIRLS?

PANEL 2. THE LITTLE GIRL STARES UP AT PRINCESS DIANA, WONDER IN HER EYES.

PANEL 3. WONDER WOMAN, GIVING THE GIRL A WINK AND A SMILE.

And, because this is already crazy long and I just can't stop, a scene from the climactic battle...

NEXT PAGE, PANEL 1. DIANA STANDS ALONE ATOP THE WALL. SHELTERED IN THE CITY BEHIND HER ARE THE COLLECTIVE FIRST BORN DAUGHTERS OF GREECE. DRESSED IN THE CLASSIC COSTUME, COVERED IN HER TUNIC, SHE'S ARAGON AT THE BATTLE OF HELM'S DEEP. PULLED TAUGHT BETWEEN HER FISTS, SHE'S HOLDING A COILED END OF THE LASSO IN EACH HAND.

PANEL 2. THE CLASSIC GUNFIGHTER'S SHOT, FROM BEHIND WONDER WOMAN'S RIGHT HIP, WITH ENOUGH OF THE COILED LASSO VISIBLE IN PLACE OF THE GUN AND HOLSTER. IN THE BACKGROUND WE GET A FIRST GLIMPSE OF THE HORDES ASSEMBLED AGAINST HER.

PANEL 3. WIDESCREEN SHOT. IT'S FELIX FAUST'S ASSEMBLED ARMY OF MYSTICAL CHEETAH PEOPLE, CHARGING AS ONE TO STORM THE GATES.

CAPTION: YOU'LL GET NO MORE WARNINGS! TURN BACK, NOW!

PANEL 4. CLOSE ON WONDER WOMAN. HER EYES SQUINT AGAINST THE WIND. PRINCESS DIANA, CHAMPION, STEPS OFF THE WALL TO MEET HER FOES HEAD ON.


I really hope that I don't have legions of Diana fans clamoring for my head. I'm sure this take is right now, as I type, making someone angry.

I have always wanted to give Diana a definitive origin, that coould easily be told as a small OGN.

It would start with her mother Hippolyta, however.

Still, it would have to be something special. OGN's for superheroes haven't been used for awhile.

My goal with this (beyond the scope of the Slushpile Challenge) was to pitch an idea for a single WW story that, if it was on a bookshelf, I could hand to my nieces when they're older and make them fans.

There've been good runs of WW, but I was hard pressed to think of a done-in-one graphic novel that a little girl could read as a straightforward introduction to the character that didn't have Batman or Superman in it.

Oh, and to everyone that's here by way of When Fangirls Attack, howdy!
6 hits a day jumped to over a hundred yesterday. You're all welcome to stick around and enjoy the show. There's a new half-baked comic pitch every day for the rest of the month.