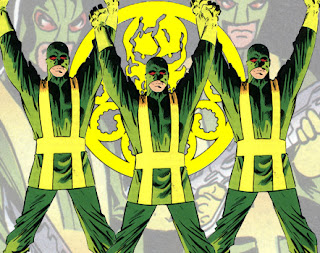 Bob Lerna is a decent enough guy who loves his wife and kids, he just happens to also be a mid-level HYDRA agent. Fun Fact: Lake Lerna is the dwelling place of the Hydra in Greek mythology.

1st arc: "Performance Review" we meet Bob, who's a reasonable guy. He's evil, but not Evil. $100k in school loans and a Masters in electrical engineering. Why'd he join HYDRA, an evil terrorist organization bent on world domination? His uncle Ben convinced him it'd be a good idea, Ben Lerna. Be a sleeper agent, kid. Pay off your school, sock a little away for a rainy day, get a nice house in the 'burbs. One weekend a month, two weeks a year. They never mentioned the dislocated shoulder thanks to an uru hammer or the trick knee that locks up every time it rains, courtesy of a Wakandan king in black tights.

2nd story arc: "The Secret Origin of Bob!" Early days of Bob, what he was like as a kid. We see Bob in college, an undergrad at ESU, living in the dorms. He's constantly woken up in the middle of the night, or being interrupted when he's trying to study, by the party dude across the hall, Johnny Storm. Witnessing the Avengers in a classic battle. Rescued by Starfox as a building's about to fall on him. " Wow, he's pretty hot. Wait. What? He's a dude!" Little Bob, admiring his Uncle's HYDRA uniform, all green and cool. Arc ends with Bob signing his papers. Induction ceremony ends with Bob wearing "the greens" and standing in the classic formation. "Hail HYDRA? What was I thinking?"

3rd arc: "Promotion, Deadly!" Bob's up for a promotion, two of them. The 9-5 job likes his work and is willing to move him into the corner office. The weekend job has an "unexpected vacancy" it needs to fill in its upstate NY LMD design facility, thanks to some cape and tights jerk wearing Quantum bands. The wife doesn't want to move, she likes it where they are, but can Bob say "no" when Baron Von Stucker sends you a "request"?

The series is narrated by Bob through 1st person caption boxes.

Bob's a regular schlub, not a cartoon villain, so he makes mistakes and gets in over his head. He progressively gets eviler (more evil?) at the series advances and he gets deeper into the organization. At first the things he'd tasked to do by HYDRA seem harmless enough. No one he knows is getting hurt and, like Uncle Ben often reminds him, "Hey, HYDRA's working to change the world, kid." After Bob sees first hand the Evil of HYDRA the scales fall from his eyes and he has the "My God, what have I been doing?" moment.

At this point the series really takes off. Bob's in deep and personally responsible for multiple atrocities. There's no leaving HYDRA, not alive anyway. This is when the series will shift in tone and we'll follow Bob as he tries to sabotage HYDRA from within while maintaining appearances and keeping up with all the right paperwork. We're a couple of trades in and now Bob's using HYDRA's tech and resources to actually do some of the world changing he imagined and make amends without attracting attention from the management.

Man vs. Environment. It's a regular guy who's in over his head, seeking redemption and trying to balance his home life, his work and the evil he has to keep doing (and undo) to stay alive.

The LMD Facility Bob gets transferred to is an amalgam of the Globex Corporation and an evil Project Pegasus.

Janet Lerna, Bob's wife and source of consternation. She loves the extra money from Bob's "weekend job" but how's she going to react when she finds out what he does to get it?

Rick Lerna, Bob's son. A regular kid and the reason Bob gets out of bed in the morning.

Along the way we'll also have run ins with more notable HYDRA personalities and some "famous faces" of the Marvel Universe.

ISSUE ONE, PAGE 1, SPLASH. BOB LERNA, MIDDLE AGED REGULAR GUY WITH A BIT OF A PAUNCH IS SITTING ON THE TABLE IN A DOCTOR'S EXAM ROOM.

CAPTION: I'M SURE YOU'VE SEEN THESE GUYS ON THE NEWS IN THE GREEN AND YELLOW JUMPSUITS. HYDRA SOLDIERS. USUALLY THEY'RE GETTING THE CRAP KICKED OUT OF THEM BY CAPTAIN AMERICA OR THE AVENGERS.

CAPTION: ME? I'M ONE OF THOSE GUYS.

PAGE 2, PANEL 1. A DOCTOR IN A WHITE LAB COAT HAS ENTERED THE ROOM. HE'S HOLDING A MEDICAL CHART.

CAPTION: EVERY YEAR I HAVE TO GO IN FOR A PHYSICAL. PART OF THE JOB.

PANEL 2. TWO SHOT OF BOB AND THE DOCTOR.

CAPTION: AND EVERY YEAR IT GETS WORSE

DOCTOR: WELL, YOUR KNEE'S NOT GOTTEN BETTER SINCE THE LAST TIME YOU WERE IN. I'M AFRAID ITS GOING TO KEEP GIVING YOU PROBLEMS, ESPECIALLY IN BAD WEATHER.

CAPTION: THANKS YOU WAKANDAN JACKASS. SO MUCH FOR RUNNING AROUND WITH MY KID.

PANEL 5. TWO SHOT AGAIN. THE DOCTOR'S READING OFF THE CHART.

DOCTOR: AS FOR THE SHOULDER, THE MRI'S NOT GOOD. WE CAN REPAIR THE TISSUE DAMAGE WITH SURGERY EXCEPT...

DOCTOR: YOU WROTE DOWN HERE "URU HAMMER" AS THE CAUSE.

DOCTOR: YOU'D HAVE TO PAY FOR ANY SURGERY OUT OF POCKET.

CAPTION: ONE WEEKEND A MONTH, TWO WEEKS A YEAR. I EVER SEE MY RECRUITER AGAIN, I'M GONNA DUMP HIM IN THE NEGATIVE ZONE.