Today's challenge topic: Star Comics. Pick a defunct property and revitalize it as a true all-ages property, something kids and adults would want to read. Bonus points for the more goofy or obscure the original. Caveat, "Peter Porker, Spectacular Spider-Ham" is off limits. 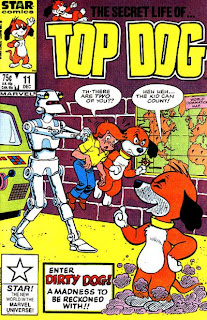 "Top Dog is a talking dog who befriends a human child named Joey Jordan. Top Dog goes on to live with Joey, who promises not to expose the fact that Top Dog can speak. The duo go on to have adventures involving spies, criminals and mad scientists."

So it's the story of a talking dog and his boy aimed at kids who still read Richie Rich. Hmm...

Okay, so this is the story of a boy and his dog. In this case, the boy is a young Clint Barton and his dog, who only Clint knows can talk and just might be a space alien pooch.

"The Secret Adventures of Clint Barton"

8 year-old Clint Barton is a precocious kid with a mop of blond hair and knack for getting into trouble, similar to Dennis the Menace and Calvin. He's basically a good kid though. Clint's hardly ever seen without his trusty slingshot sticking out of his back pocket. It's a toy with which he displays almost preternatural accuracy.

Top Dog just happens to be an Inhuman mutated by terrigen mists to look like a dog. Or possibly he's an intelligent canine Skrull. It's not important, but what is important is his friendship with Clint. The two are inseparable, like any good boy-and-his-dog team should be. "Top Dog" is exactly the kind of name a kid would come up with, and it's the one Clint's given him.

Lizzie Barton is Clint's older sister and an almost constant obstacle. They fight more often than not but if Clint were ever in real trouble, Lizzie would be there to defend him.

Clint's Mom and Dad appear in the series irregularly. They're your typical parents, understanding of Clint's wild nature but only willing to let him run amok to a point. Their ultimate fate, and Lizzie's, will not be dealt with. This is a kid's comic after all; not really the place for a family killed by dad's drunk driving. That said, an observant adult reader who knows Clint's back-story might pick up on a clue or two along the way.

Barney, the brother who's already established in continuity, will not appear in the series although he might be mentioned. This will keep the focus on Clint and Lizzie when sibling rivalry is called for.

Waverly, Iowa is a surprisingly interesting place for a town with fewer than 10,000 people. Clint and Top Dog will run into all sorts of nefarious characters, including spies, criminals, space aliens, neighborhood bullies, and mad scientists.

Mervin Megabucks is the richest kid in town. He's pretty much a spoiled brat version of the Richie Rich archetype and a good object lesson for young readers that getting everything you ask for isn't always a good thing. If an 8 year-old could have an evil moustache, this one would. Issue #5 probably involves Mervin stealing Clint's slingshot. Mervin really needs to learn how to share.

Dirty Dog is a mangy mutt who's followed Top Dog to Waverly so he can continue bullying him.

Frank and Stein are a strange couple of kids. They spend most of their time in their tree house laboratory building the crazy contraptions that win them every science fair. When Frank and Stein's homemade robot runs amok in issue #6 it'll be up to Clint and Top Dog to save the neighborhood. Adult readers might see a distinct resemblance between young Stein and a certain Silver-Age arch-enemy of Ant-Man.

Action in the series will follow the general guidelines of cartoons like Batman: The Animated Series or Teen Titans. Similarly, stories will have enough layers to interest adults and a kid friendly tone and lesson in each done-in-one issue.

NEXT PAGE, PANEL 1. WIDE ON A SUNLIT PATH THROUGH THE WOODS. TOP DOG AND MANGY MUTT HAVE SQUARED OFF, FANGS BARED. MANGY MUTT'S FUR IS MATTED AND DIRTY AND HE'S NOT WEARING A COLLAR. HE'S ALSO BIGGER THAN TOP DOG, LIKE MOST BULLIES.

MANGY MUTT: WE'LL SEE ABOUT THAT.

PANEL 2. EXTREME CLOSE UP OF A SLING SHOT. THE RUBBER BAND IS PULLED BACK AND READY TO FIRE. IT'S LOADED WITH A GREEN PLASTIC ARMY MAN.

PANEL 3. WIDEN OUT TO SEE THAT IT'S CLINT HOLDING THE SLING SHOT AT THE READY. HE'S STANDING UP ON TOP OF A ROCK AND HIS BANGS ARE FALLING IN HIS EYES.

CLINT: HEY! STAY AWAY FROM MY FRIEND!

Yeah, I just pitched Marvel Team-Up starring Hawkeye and Top Dog. What of it?
Posted by Michael Strauss at 1:39 PM