Slushpile Challenge 13: The King of the Sea

Challenge topic: The good news is that you've been given a comic series. The bad news is that it's Aquaman. You have 4 issues to turn sales around or you're fired. Pitch those 4 issues that will make Aquaman a decent seller. 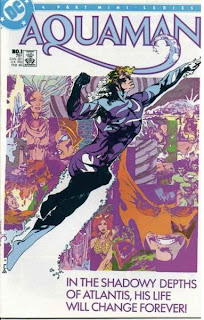 Post Infinite Crisis, the DCU is a complex and dangerous place. The new status quo has shown that hero and villain alike can and will die violent, brutal deaths. It's a place with no easy answers. It has also seen the return of the storied multiverse.

Arthur Joseph Curry has reluctantly picked up the mantle of Aquaman and found himself quickly mired in both the previous Aquaman's complex history as well as the deepening mysteries surrounding his own life. Nothing has come easy for the young hero, but he's risen to meet every challenge... so far.

King Shark. "You will protect him. You will be my agent in his camp. Close enough to guard against others who seek to control him. And close enough, when I decide the time is ripe... ... to strike, and kill him without warning." The King Shark is a bloodthisty engine of destruction who's been biding his time at the new Aquaman's side. He's Iago with a dozen rows of razor sharp teeth, and the time has come.

"Kings of the Seas"

Issue One: On the heels of Black Manta's first clash with this new Aquaman, he has new reason to hate the interloper who's taken it upon himself to protect Earth's undersea realms. Swearing revenge, Black Manta has gathered together a collection of the greatest of the previous Aquaman's foes. Together they ambush Arthur Joseph Curry, intent on dealing a final blow. King Shark, sees his opening and betrays Arthur, striking him down from behind. Just as the killing stroke is about to be dealt, help arrives from an unexpected corner... Aquaman, clad in his classic Siler Age garb, green gloves and all, and riding Stormy the seahorse with Tusky at his side.

Issue Two: The Aquamen make a narrow escape from Black Manta's trap and regroup in the safety of the JLA's new Hall of Justice. We learn that this new Aquaman is, in fact, the Aquaman of Earth-2. He's an amalgam of all the best aspects of the Silver Age Aquaman, plus the version from the cartoons. It's Aquaman at the height of his powers and with none of the convoluted history.

Issue Three: Arthur and Aquaman gather their forces for the big showdown with Black Manta. Aquaman also presents Arthur with a gift, the blue camouflage suit. "Wear it in the coming battle. It suits you far more than it ever did me."

Issue Four: This is it. The Aquamen of two worlds lay the smack down on everyone who ever crossed them. Oh, and King Shark brutally murders Tusky on panel, with plenty of gore and blood in the water because damn it, he's King Shark and that's how he fucking rolls.

It's Aquaman starring in a giant widescreen action movie and at the end we're left with an Earth-1 Aquaman who's battle tested and sure of himself. He'll also have a new arch-enemy in King Shark.

The door will also be left open for future stories set on Earth-2, where the Aquaman of that world is one of, if not the premiere superhero in all of his seahorse riding, orange shirt glory. Future stories with Earth-2 Aquaman will take place there, giving DC readers a place to go to experience the new Earth-2 first hand.
Posted by Michael Strauss at 11:10 AM