Penultimate challenge topic: DC has decided to do it's own spin on the "What if..." comic. Pitch one.

"What if... Barry Allen had survived the Crisis?" 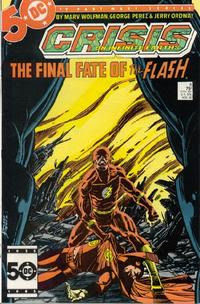 Barry Allen outraces the Anti-Monitor's anti-matter cannon and dismantles it, ensuring the heroes that confront him in the anti-matter universe can acheive victory. Unlike established history, Barry Allen survives the encounter.

The issue spotlights Barry Allen's effect on the Post-Crisis DCU.

Barry answers Dr. Fate's call for heroes to oppose the forces of Darkseid's henchman, Glorious Godfrey, and thus is part of the new Justice League. Barry is a veteran role model for the more inexperienced members of the new League. He acts as an intermediary between Guy Gardner and Batman and helps hold the League's initial line-up together longer.

The Flash's experience is key also, as he uses his super speed to distract the monster Doomsday. As the last possible instant, Flash pulls the injured Superman away from the killing blow. He hides the Man of Steel away in the Fortress of Solitude, where can convalesce. This doesn't avert the "Reign of the Supermen" from happening, but Kal-El does recover from his injuries in time to prevent the destruction of Coast City at the hands of Mongul and Hank Henshaw, the Cyborg Superman.

Barry and Hal Jordan were friends going back to the inception of the League. It's this closeness that clues Barry in to the fact that all might not be right with Hal. When Hal Jordan goes berserk, seeking revenge against Mongul and the Cyborg Superman for their attempted destruction of his home, it's Barry that organizes a response. He's not the fastest man alive for nothing. Barry, Wally and the heroes of Earth track down Jordan and drive the yellow-impurity Parallax entity from his body.

After the events of Infinite Crisis, the Flash is separated from the Speed Force and spends a year as one of the "space-lost" heroes with Adam Strange, Animal Man and Starfire. 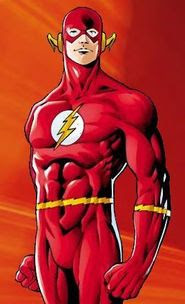 But Barry Allen is not the only Flash.

Out of the shadow of the Flash legacy, Wally West is able to come into his own. An adult, he is no longer a "kid" Flash. Wally now calls himself the Streak and, in a nod to his mentor, wears an updated version of his old Kid Flash costume. He remains with the Titans and his presence helps avert the terrible mid-nineties incarnations of the team. Under Wally's leadership the Titans take their place as equals alongside the JLA.

Wally also is there to catch the warning signs of Frances Kane's emerging multiple personality disorder and gets her the help she needs. Frances' Magenta persona never emerges and, while she doesn't use her powers as a super-hero, Wally and Frances remain a devoted couple to the present day.

Also operating out of Titans Tower is a second team, The New Teen Titans, under the tutelage of Wally and the senior group. Currently, this roster is lead in the field by Robin (Tim Drake) and consists of Wonder Girl, Superboy (Connor Kent survived the Infinite Crisis, but that's another story), Captain Marvel Jr., Joker's Daughter, Kid Devil and the alluring Miss Martian.

PAGE 1, SINGLE PANEL SPLASH. THE INSANITY OF THE COSMOS. SWIRLING GALAXIES AND ALIEN WORLDS, SURROUNDED BY A MAELSTROM OF KIRBY DOTS. IN THE FOREGROUND, EXPLODING OUT OF A BOOM TUBE, SITS METRON ASTRIDE HIS MOBIUS CHAIR. HE'S ADDRESSING THE READER AS HE SPEAKS.

CAPTION: AND WHO'S GOING TO LIVE.

METRON: FROM THE SOURCE WALL, TO THE ANTI-MATTER REALM OF QWARD, TO THE THIRD PLANET OF SOL...

METRON: I, METRON, HAVE TRAVELED THE UNIVERSE IN MY MOBIUS CHAIR IN AN ENDLESS SEARCH FOR KNOWLEDGE.

METRON: BIRTHS. DEATHS. THE END OF TIMES AND NEW BEGINNINGS. I HAVE WITNESSED IT ALL IN MY LONGING FOR THE TRUTHS ON THE UNIVERSE, INCLUDING A REALM WHERE THE HERO YOU CALLED BARRY ALLEN...

The Streak? Yeah, I don't know either. I needed another name for Wally to use. Zoom was taken and Impulse is dumb. I was gonna go with Crackerjack but then I realized that it's not 1942.

Like it says up top, this is the penultimate topic in the sometimes thrilling Slushpile Challenge. The goal was twenty pitches for the month of April. Well, stay tuned, True Believers! April isn't over until midnight.

Labels: Slushpile challenge, What If... DC?