Topic: Books centered around villains don't do well, historically. Editorial wants you to give it another kick at the can. Pitch a super-villain book.

"Hellfire: Do What Thou Will"

Since 1746, the Hellfire Club has catered to society's elite. For some though, status and wealth is not enough. The lust for power drives the Hellfire Club's Inner Circle. From politics, organized crime and weapons trafficking to murder, vice and black magic, there's nothing the Hellfire Club is not involved in.

The series follows the Machiavellian dealings of the Inner Circle. Its wheels-within-wheels intrigue and scheming, equal parts Godfather and Sopranos. 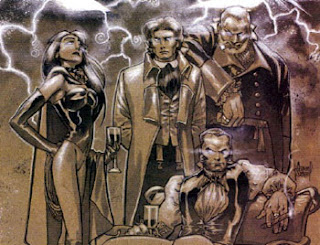 Sebastian Shaw, mutant with the power to redirect external force into internal strength. Shaw is the will of the Inner Circle. He sets the agenda, ensures that business gets done and metes out punishment when it's not. He's DeNiro from the Godfather Part II reimagined as a super-villain.

Selene, mutant sorceress and temptress. Purported to be millennia old, Selene is the most powerful and dangerous member of the inner circle. She maintains her unearthly beauty by draining the life force from others. She can also use this energy to animate inorganic matter, manipulate flame and influence the minds of others. Selene's lust for power is only distracted by her bacchanal desires. The other members of the Inner Circle may be evil, but she is Evil.

Daimon Hellstrom is the Inner Circle's voice of temperance. Hellstrom's seen true evil and knows what comes of it. He's maneuvered himself into a position of power within the Circle in order to steer it in a new direction or, failing that, bring it down. If the others knew his true intentions he'd be lucky to survive the hour. The character's presence gives someone for the reader to root for, if not identify with.

Regan Wyngarde, also known as Lady Mastermind. She has a talent for projecting hypnotic illusions. Ms. Wyngarde is rapidly ascending through the ranks of the Hellfire Club and is a more recent addition to the Inner Circle. She's driven to succeed within the Hellfire Club where her father failed. What she lacks in experience she makes up for with a callous distain for others.

Cole, Reese and Macon are three of the Hellfire Club's most competent veteran agents. Acting alternately as private bodyguards, enforcers or assassins, they've seen it all and aren't afraid to get their hands dirty. The three bear numerous scars and cyborg replacements, indicative of their long and dangerous careers.

Other characters will come and go as needed. Life in the Hellfire Club offers many rewards but the risks can be high and life, short.

Opening arc, "The Dilettanti". Introduction to the new status quo of the Hellfire Club. In the first issue, Cole, Reese and Macon assassinate a US Senator who's membership with the Hellfire Club was "revoked". The arc unfolds with the fall-out from the assassination and the Inner Circle's machinations to fill the vacuum with their own man.

Second arc, "The George and Vulture". Flashbacks show the origins of the Hellfire Club and it's earliest incarnations. Meanwhile, Hellstrom is backed into a corner and must endorse a plot of Selene's that, furthering her ends, would murder an entire family tree but (unbeknownst to her) ultimately save hundreds from certain death.

ISSUE 1, PAGE 1. SPLASH. THE SUN IS SHINING DOWN, BRIGHT AND CHEERFUL, ON THE STONE MANSION THAT'S THE HEADQUARTERS OF THE NEW YORK BRANCH OF THE HELLFIRE CLUB. BEHIND THE WROUGHT IRON GATE, IS AN IMMACULATE FRONT LAWN DOTTED WITH SONG BIRDS AND A CUTE LITTLE BUNNY, NIBBLING ON SOME GRASS. THE FRONT GATE BEARS THE CLUB'S COAT OF ARMS AND, BELOW IT, THE LEGEND "FAY CE QUE VOULDRAS". THE CAPTION BOX SHOULD BE CENTERED AT THE BOTTOM OF THE PAGE.

PAGE 2, PANEL 1. SELENE LIES SPRAWLED ACROSS AN ENORMOUS BED. SHE'S DRESSED IN LITTLE MORE THAN LEATHER STRAPS AND RED SCRATCH MARKS. THE HEADBOARD IS A MASSIVE THING OF EBONY, ALL GIANT WINGS AND CARVEN TEETH. THE REST OF THE ROOM IS RED DRAPERY. THE FLOOR IS STREWN WITH NAKED BODIES, UNCONSCIOUS OR CORPSES SHOULD BE UP TO THE READER TO DECIDE. A SIDE TABLE NEAR THE BED HAS A SPEAKER PHONE ON IT.

SPEAKER PHONE: REESE REPORTS THAT HE AND AGENTS COLE AND MACON ARE IN POSITION. THEY'RE READY TO PROCEED WITH YOUR GO AHEAD.

I wanted to pitch a team of Black Adam, Zoom, Grodd, Black Manta, Deadshot, Cat-man, Mr. Mind and Sinestro but realized that the only place it works is on a Heroclix table. I still like the idea of a new Legion of Doom, put together by Black Adam after the WWIII event. 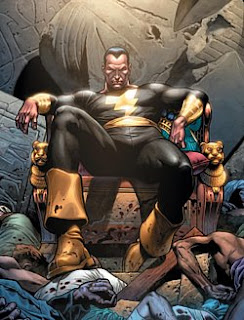 Oh, and I know what Teth-Adam's new magic word is, since Batson changed it.

What else would be both creepy and in keeping with a classic DC feel than Teth-Adam having to whisper "Mazahs" in order to call down the lightning?

Postscript: This is my final entry in this edition of the Slushpile Challenge. I know I promised it to you faithful readers yesterday but, in my defense, I drink. And let me tell you, twenty different pitch ideas in a month is an exhausting brain-marathon.

We're now moving on to the judging round. Friend of the site Jere Dolan is the unoffical arbiter of the challenge but I'll be opening up a poll for readers of the site to select their favorite (or least hated) pitch in a day or so.

As always, thanks for reading and go Sabres!
Posted by Michael Strauss at 5:14 PM

I would so read this.

And I haven't bought a Marvel comic in years.

Thanks, Erin. Feedback is awesome. And reading some of your ideas... impressive.

I've been kind of ignoring the blog after the marathon pitch-a-day madness last month. But it's only because I'm in the middle of turning the "Irregulars" pitch into a full script.