Today's Challenge: Revive an obscure Golden Age character that has never had a chance in the modern age. Extra points awarded for obscurity of character, and how out of place he seems in comics today. 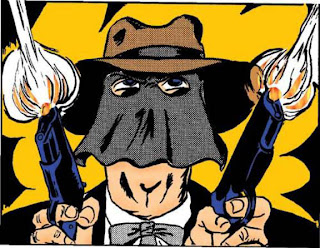 "The Clock fought crime, wearing a business suit and a full-face mask, and that was it. He usually left a calling card, which depicted a clock accompanied by the words "The Clock Has Struck". Later, when he was appearing in larger chunks, there was space to show he was former district attorney (and current society fop) Brian O'Brien, whose qualifications as an action hero included a background in college football and polo. There was even room for an occasional supporting character, such as Pug Brady, Brian's exact double, who served as his sidekick for the first couple of years. Toward the end, he took on a teenage girl named Butch in that role." 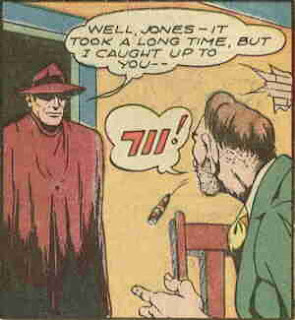 "But in the daytime, he hung around the jail where he was a convicted inmate.

Of course, the fact that he was a resident of a jail cell with the lucky number 711 at Westmoor Prison, from which he obviously derived his superhero name, was just a ghastly mistake. In fact, when he was known as Daniel Dyce, he was a district attorney. But he had a pal named Jacob Horn, who looked exactly like him, and Jacob was in the process of going down for a crime he actually did commit. Just before he went to trial, Jacob begged Daniel to let him out for just a little while, so he could be at the hospital when his son was born; and what the heck, Daniel was a big enough idiot to let him do it. Since they could pass for each other, and since Daniel had an "in" with the system, they simply traded places for the evening.

But Jacob never made it to the hospital. He got hit by a car on the way, so nobody came to relieve Daniel. The dead guy was identified as the D.A., and the one that was left wound up in the slammer. Fortunately, the prisoner was able to dig a tunnel from his cell, through which he could come and go at will. He had a fine time all night as the scourge of the criminal class, but was always back in time for morning roll call. He even handed out fancy cards, supposedly showing the crooks what fate awaited them, but in reality, they represented the fate that had already befallen the masked hero."

Brian "BB" Williams grew up in Marvel's Los Angeles a high school football star and self proclaimed "gangsta". In and out of juvenile detention halls, he met assistant D.A. Daniel Dyce who saw promise in the kid and kept him out jail. While BB was starring at tailback for ESU, his little brother and sister were gunned down in a drive by shooting.

The deaths of his siblings changed BB Williams. Gone were the hip hop records and gangsta attitude. In it's place, the conservative suits, horn rims and bow tie typical of Muslims in America.

Brian Williams new persona is a cover though, meant to distract attention. At night he dresses in the gangsta gear, complete with Flava Flav-style oversized clock, and hits the streets to fight crime, avenging his siblings' deaths. He conceals his face with a black mask and wields twin pistols of the make and model that slew his siblings.

"The clock has struck, sucka! And your time is up!"

Meanwhile, assistant D.A. Daniel Dyce has fought crime his entire life from within the system as one of Los Angeles most determined prosecutors. Dyce had a secret though. His desire for justice was fueled by the fact that his own people, mutants, rarely got any of their own.

Daniel Dyce is an omega-level teleporter, able to transport himself or any object he touches across vast distances, even across dimensions.

In the fall out from Marvel's Civil War, D.A. Dyce protested what he saw as an unfair law and found himself locked away in the Negative Zone's Facility 42. Now Daniel Dyce spends his days languishing away in cell #711, bound to abide by a law he doesn't believe in. But at night he teleports to The Avenging Clock's side and continues his fight for justice as Number 711!

NEXT PAGE, PANEL 1. A DARK ALLEY AT NIGHT. ANGLE LOOKING UP AT THE CLOCK, WHO'S STANDING AT THE EDGE OF THE ROOFTOP, AIMING HIS PISTOLS INTO THE ALLEY BELOW, ALMOST AT THE READER.

THE CLOCK: YO, BITCHES! GUESS WHAT TIME IT IS?

PANEL 2. A GANG OF GANGSTA THUGS IN THE ALLEY REACT TO THE CLOCK'S SUDDEN APPEARANCE. THEY'VE BEEN CAUGHT IN THE ACT, MUGGING AN OLD MAN. THE LEADER IS POINTING UP AT THE CLOCK.

THUG #2: SCREW THAT NOISE! THE CLOCK PLAYS FOR KEEPS.

PANEL 5. A CLOUD OF RED SMOKE IS ALL THAT REMAINS OF THUG #2.

So, the challenge was to revamp one GA character but I combined the two as a "hip-hop plus a white guy" riff on Cloak and Dagger because well...

When Tha Clock speaks I know what time it is.
Posted by Michael Strauss at 1:03 PM