Challenge #8 was to do a Golden Age riff on the X-men. 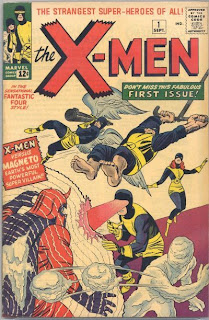 Published by Timely from May 1941 to Sept 1947, each issue of Uncanny Fun Comics contained a 8 page main story followed by 3 backup features that ranged from 2 to 4 pages each. After the end of WWII, sales steadily declined as the focus shifted from Nazi bashing to stories featuring more and more space alien antagonists. Eventually, the series was cancelled but not before the most memorable post-war story, "The Magnetic Menace from Mars!" was published.

Private Summers, U.S. Army. All-American quarterback Scott Summers wanted to do his part for victory in Europe. The army made him a motorcycle bike-messenger. One night, while carrying orders to the front, a rocket shell exploded in the road and knocked him from his motorcycle. Pvt. Summers was knocked unconscious into a trench that was full of a mysterious red mist. When he awoke in the morning, the mist was gone and Pvt. Summers' eyes now emitted a strange red light. Anyone that the light touched would become instantly paralyzed. Now, Pvt. Summers uses his motorcycle and his mysterious light to sneak behind enemy lines, taking the fight to the very heart of Berlin itself!

The Avenging Angel. Society fop Warren Worthington III spends his days enjoying London's high society. At night he climbs into his private plane, a custom black and yellow P-51 Mustang he calls "The Angel", and patrols England's skies. The Avenging Angel backup stories were usually 2 pagers, lacking the space to explain thing like where Worthington got his money from, as the character was clearly very wealthy, or why he wasn't in the army. The only other character to appear more than once was the German ace Red Raven. Worthington and the Red Raven engaged in several dogfights over the years, with neither gaining the upper hand.

Hank McCoy: The Boxing Beast. Aboard an aircraft carrier in the South Pacific is Navy Chief Hank McCoy, college boxing champ. Anywhere else on earth and Hank McCoy would be feared and shunned by society due to his simian visage and squat tank-like body. Aboard ship though, with his fellow sailors he's known as The Boxing Beast and is respected for his fighting prowess and knack for rescuing his fellow sailors. The Mystic Mind of Xavier, a voice only he could hear, sent messages to Hank McCoy, alerting him of danger or telling him where his services would best be needed.

Ice-Man. Ice water runs in his veins. For Don Drake, U.S. Army sniper this saying is true. He literally has ice water in his veins thanks to a freak accident while on a mission in the Great White North. Don Drake is a crack shot with an icy demeanor and when the military needs a special target taken out they send in the ice man. Many of Don Drake's backup tales involved him being assigned an impossible target, often taking on Nazi soliders 20 to 1.


This is the weakest of the lot so far. In my defence, I woke up this morning with a 103 degree fever and spent most of the day in bed. I needed two shots of a day time medicine whose night time version is the green elixir you take when you want to knock yourself unconscious without the messy head trauma.

Depending on how delirious I am tomorrow I'll polish it and include a couple sample pages.
Posted by Michael Strauss at 10:20 PM