Slushpile Day 9: "Mind If I Show You Around the Solar System?"

"Something borrowed, something new"

The challenge: take an established character who can't sell a book on his or her own. Create a brand new character to add to the book that will give it new life.

Bonus criteria for judgment: Bonus points for originality of new character, and for hopelessness of the old character being able to carry a book.

Every fifty-six years the power of the Comet returns to Earth and takes on a different form. In 1951 a man named Adam Blake was imbued with the powers of telepathy and telekinesis and reborn in a super evolved form. In 1895 Archie Sandalford, professor of letters at Cambridge college, was bathed in the comet's light and for the rest of his days saw portents of doom for those around him and would glow with an unearthly light. Throughout the past, other comets have cast their light upon the unsuspecting.

Now the year is 2007. Biela Peshtigo is a 27 year old architect of mixed Aboriginal/European descent living in Tasmania's capitol of Hobart. Coming home after a late night of partying with her friends, Biela was struck by an extraterrestrial light. She awoke the next morning in her own bed with no memory of how she got there. Tattooed on her forearm was the mysterious designation "C/2007 K1 Peshtigo".

Soon afterwards, Biela discovered she'd been granted incredible power, including flight and super speed. As the new Comet, she also has the ability to survive in a vacuum (outer space) for extended periods of time and can exert mental control over rock, dust and ice down to a molecular level.

Fun Facts: The Biela Comet was believed to have caused the Peshtigo Fire the same day as the nearby Great Chicago Fire, one of the largest recorded firestorms.

"Firestorm and The Comet" 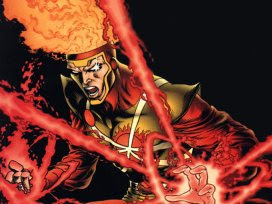 Our series leads are the Ronnie Raymond/Prof Stein classic version of Firestorm and new superhero Biela Peshtigo, The Comet.

The series focuses on her adapting to her new powers and the developing romance between Firestorm and a character who's a novice hero although she's an intelligent, capable woman who's every bit as powerful as he is. Along the way the series will revisit classic Firestorm villains (stretching the definition of "classic", I know) through the Comet's eyes, updating them along the way, as well as introducing new threats.

With two powerful characters, stories can be Earth bound or cosmic in scope with equal ease. In fact, a future arc will explore the origins of the comet powers, their cyclical nature and Biela's place in the cosmos.

Firestorm, always viewed as a rookie hero, even twenty years after his first appearance, will now get to mentor and train someone who's very similar to how he was when he started out.

NEXT PAGE, PANEL 1. THE COMET AND FIRESTORM ARE FACING EACH OTHER IN LOW EARTH ORBIT. BIELA IS WEARING HER NEW COMET COSTUME: SILVER BOOTS AND GLOVES, WITH A BODY STOCKING THAT'S A BLEND OF SILVER AND SWIRLING, ROCKY PATTERNS. IN THE BACKGROUND IS VISIBLE THE MOON, THE SUN AND BEYOND. THE VASTNESS OF SPACE.

FIRESTORM: HEY THERE. TAKING IN THE VIEW?

THE COMET: SPECTACULAR OUT HERE.

PANEL 4. TWO SHOT OF BIELA AND RONNIE LOOKING AT EACH OTHER. IS THERE A SPARK?

PANEL 5. CLOSE ON FIRESTORM. BEHIND HIM, PROFESSOR STEIN'S FLOATING HEAD.

FIRESTORM: TALKING TO MYSELF.

PANEL 7. FIRESTORM'S FLASHING HER HIS BEST WINNING SMILE AND OFFERING HER HIS HAND.

FIRESTORM: SO, MIND IF I SHOW YOU AROUND THE SOLAR SYSTEM?
Posted by Michael Strauss at 2:50 PM