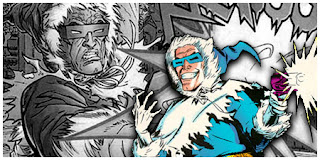 Merle Haggard's "If We Make It Through December"

Leonard Snart is Captain Cold, blue collar career criminal and longtime member of the Flash's Rogues Gallery. The story opens with Captain Cold walking alone across the Arctic tundra at night (think Jack Londron's "To Build A Fire"). He's stranded there with no transportation and nothing but his cold gun.

Inside the framing story of him trying to get to civilization, we get a series of flashbacks which reveal the main story. Cold's stranded after a heist gone wrong, a job he tried to pull that was too dangerous, too risky. A job he never would attempt normally. But why?

Cold's past has caught up with him. He has an illegitimate daughter, the product of a drunken one night stand. He pulled the job so he can give the girl enough money to get out of the abusive foster home she's stuck in. Cold's a villain, but his heart's made of stone not ice. Family's important to him, even family he didn't know existed (see past history re: Golden Glider).

So, we've got Captain Cold trying to survive in the cold (get it?) and the little girl and the heist gone wrong. The flashbacks end where the main story starts, with Cold getting stranded, and the main story ends with the hanging question of does he make it though December? It's a sad, sad Christmas tale.

24 lines in the song. Each page of the comic begins with a caption box of the song's next lyric.

PAGE 14, PANEL 1. COLD'S POV LOOKING DOWN AT HIS FEET. THE SNOW IS ALMOST UP TO HIS KNEES. VISIBLE IN THE PANEL ARE COLD'S HANDS, FINGERS CURLED UP AND NUMB. LYING HALF BURIED WHERE HE DROPPED IT, IS THE COLD GUN.

PANEL 2. COLD'S DROPPED TO HIS KNEES AND IS REACHING FOR THE GUN WITH NUMB FINGERS.

PANEL 3. MATCH SHOT OF A LITTLE GIRL, KNEELING IN THE SAME POSITION. SHE'S IN A SPARSE, MOONLIT BEDROOM, KNEELING AT THE BED AND SAYING HER PRAYERS.

PANEL 4. MATCH SHOT AGAIN, THIS TIME IT'S CAPTAIN COLD ON HIS KNEES FIRING HIS COLD GUN AT A PAIR OF SECURITY GUARDS, FREEZING THEM WHERE THEY STAND. BEHIND COLD, REACHING IN FROM OFF PANEL TO GRAB HIM ARE A PAIR OF HANDS WEARING FAMILIAR RED GLOVES WITH A YELLOW LIGHTNING BOLT DESIGN.