Classic Cover of The Week 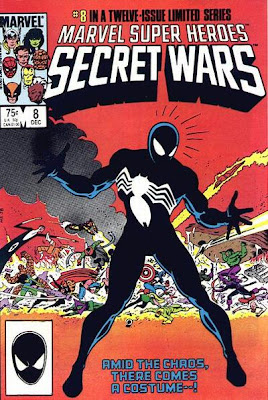 Yet another issue that I distinctly remember pulling from the spinner rack and reading on the spot before plunking down my hard earned 75 cents. How could I not? "Holy crap!! Spidey's got a new costume??? And it's black!!!"

Yeah, I spoke and thought with multiple explanation points in 1984. I was ten and I'd learned grammar and punctuation at the feet of Stan Lee and Steve Gerber. Excelsior!

Let's break for a quick aside here. The newsstand where I bought this comic had the "Hey Kids, Comics!" spinner rack and sold packs of Big League Chew but their primary hustle was cigars, chewing tobacco and adult magazines. The place had a perpetual cloud of cigar smoke pressing against it's yellowed drop ceiling tiles. Was I the last kid to buy comics from a cranky old man who'd roll his lit stogie from one corner of his mouth to the other as he took my allowance? Maybe.

Anyway, back to the action. We join our heroes as they regroup after an assult on Doom's fortress. Haggard and tired, Spidey's wishing that the Beyonder had also kidnapped a couple 3-packs of Hanes when he sees... 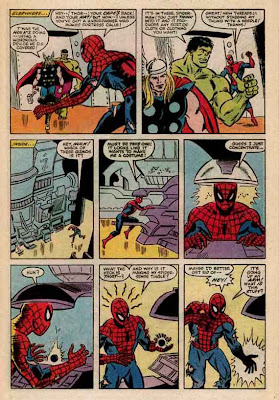 Now, my first thought is "That is Awesome!!!" Again, ten. On subsequent readings though, my brain couldn't help but come up with some legitimate questions. Did Thor use the same machine as Spidey?

"What If... Thor's hat and cape were evil symbiotes?" I must have missed that issue.

That leaves two other possibilities. A) Hulk and Thor knew what would pour out of that machine onto Spidey's hand and the two of them get together for a couple of beers and a chuckle every time Venom kidnaps Aunt May. B) The mystery aliens keep their sewing machines in the same room as their ectoplasmic containment units. Poor planning or a lack of storage space. Either way, that can't be childproof.

The more I think about it, the more I want to read about Thor's evil hat and cape possessing some poor schlub.
Posted by Michael Strauss at 12:38 PM

Also? The Hulk is right there and didn't bother to pick up some free gear, I guess his torn purple lab pants have a few issues left in them? Get some clothes on the green gorilla already